How much longer is this self quarantine going to go on…

Monday was a pretty good day. Karen came in and fed the hungry boys and got me partially dressed and up in my chair to write my exercise cycle, I'm starting to get a pressure sore because I think I did too much too fast, I'm starting back at five minutes with my legs and five minutes with my arms and see if I can move up slowly without causing any pressure sores. Adela and Adriana came by to do some more work on decorating the fence area, they are doing a great job. I sat outside and had breakfast and put the muse meditation helper on for a while, it was a beautiful day but the sun kept coming in and out. The Woofpack came by to get the boys, they just can't get out of here fast enough. Karen put me back to bed and I had all day to relax, watch TV, listen to music, watch videos, organize more pictures and work on my webpage. Rosa came in and fed the hungry crew and then fed me, cleaned up, washed the dog beds, and vacuum before she left. I watch some more TV, wrote in my blog, wrote in my food diary, logged in my five minutes on my exercise chart, and organize some more pictures. I can't believe I'm doing all this and not going crazy, I'm so used to getting up in my chair and cruising around all day it's taken me a while to learn how to relax but I'm doing it and now I like it. I know a lot of people are going stir crazy but I kind of like having time home alone by myself. 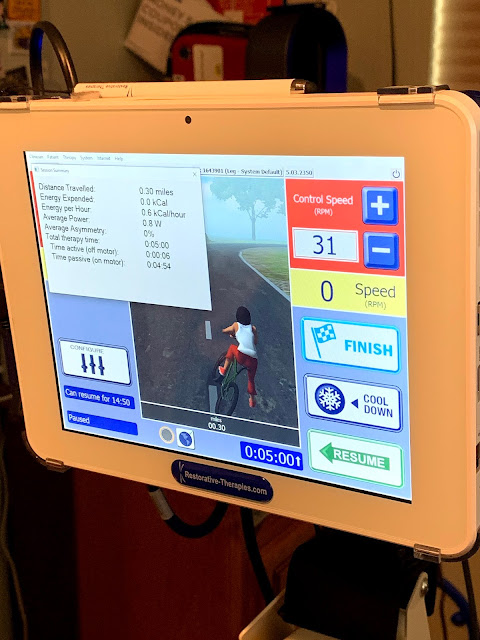 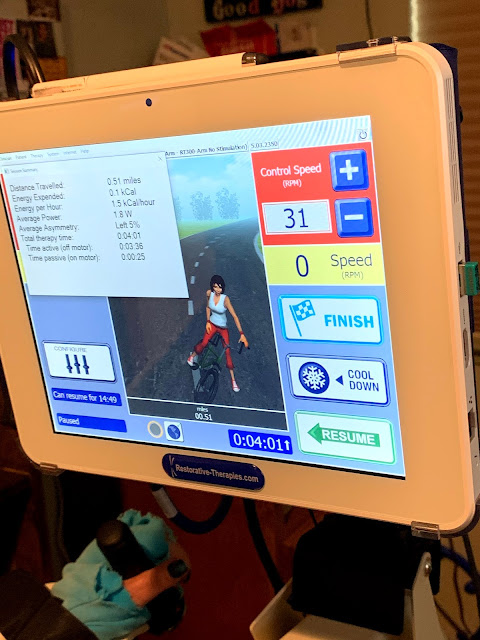 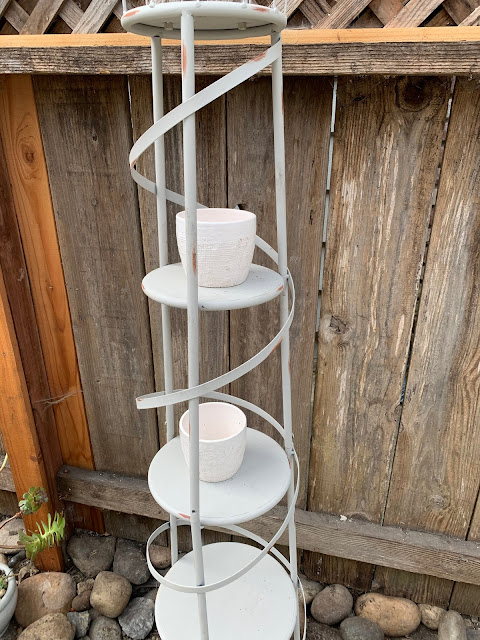 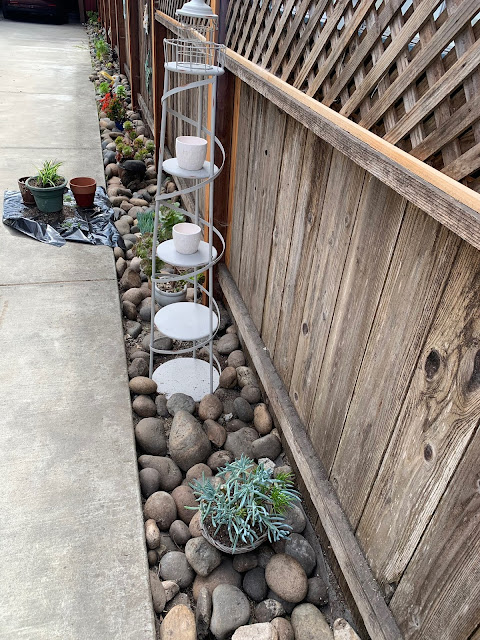 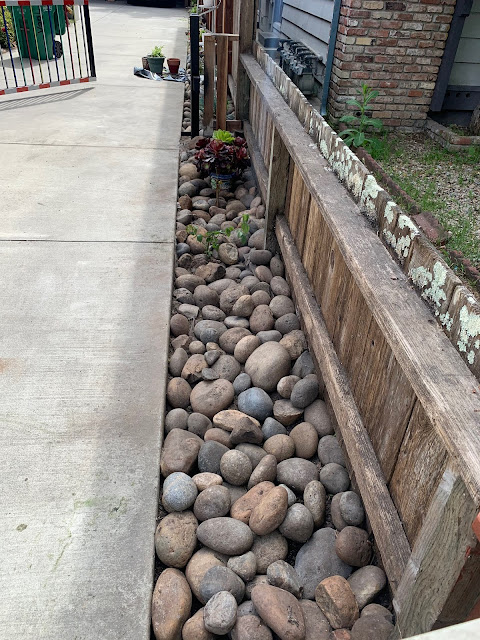 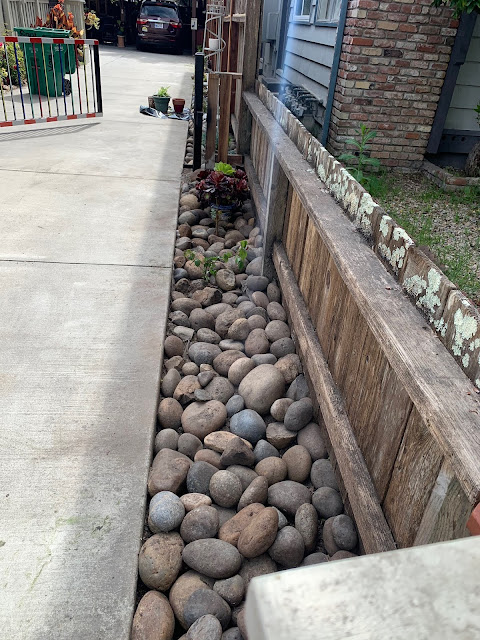 Tuesday was a pretty good day. Cindy came in and fed the hungry crew and we got a urine sample before I got up and got dressed, I have to go to the lab today and they're going to take blood and I'm pretty sure they're going to ask for urine. We headed over to the hospital and it wasn't too bad, around every corner you have to answer some questions… Do you have a fever? Do you have a cough or runny nose? Have you been around anybody who had the covert virus? Do they put hand sanitizer on your hands and then take your temperature. The weight wasn't very long at all and we got out of there pretty quick, the only issue was the Phlebotomist hood took my blood asked somebody for assistance because she had to use two syringes, I had to fill up 12 vials. While she was grabbing the first while she grabbed a little bit too hard and pulled it out of my hand and blood went shooting all over the place, even with the mask on I could tell the phlebotomist was a little angry. It went by fast and ended up they did need urine so I was glad we brought that Russia would have had to come back. We came back home just in time to meet Ronald, he came by to make sure my mattress was put on right and to fix a loose rail and my scale, he's from Hill ROM. He said everything looked good except he needed to order a cable that was cut and said he hoped to be back in a couple of weeks. I rested for a while and worked with Dude on some commands while Cindy went shopping for me at the grocery store. She came back and put everything away and then went home for the day. I watched TV for a while until I got a text from Rosa saying that she wasn't feeling good so she was going to send Adriana to put me to bed, she put me to bed and made me a peanut butter and jelly sandwich and some fruit, vacuumed, washed a load of clothes and then left. I was actually really tired and fell right to sleep and I didn't wake up until the next morning at 4 PM, I never sleep like that and it sure felt great.

Wednesday was another pretty good day. Karen came in and fed the boys and then got me up in my chair to write the exercise cycle, I back down to only five minutes because I'm getting a red spot on my bottom. I sent outside in the sun and had breakfast and coffee, the sun peeked out a couple times but it was mostly cold. Bailey's grooming service came by, I haven't seen them for a while, to give the boys a bath. we did some personal care and I got to take a nice long hot bath, I really love my bathroom… It's starting to look like a relaxing, meditating spa room. Karen put me back to bed just as Joy came by to take Dude for a cruise around Santa Cruz. Rosa came in and she still had a headache but it's because she doesn't drink any water, she rarely takes time to eat and she works really fast. I gave her some D mannose, I found a really good one that is fast-acting. She got me something to eat and buzzed around for a little bit of cleaning, sterilizing, and putting stuff away. After she left I watch teen mom and organized a bunch more pictures before I fell asleep. I'm going to turn everything off and hope that it makes me go to sleep. 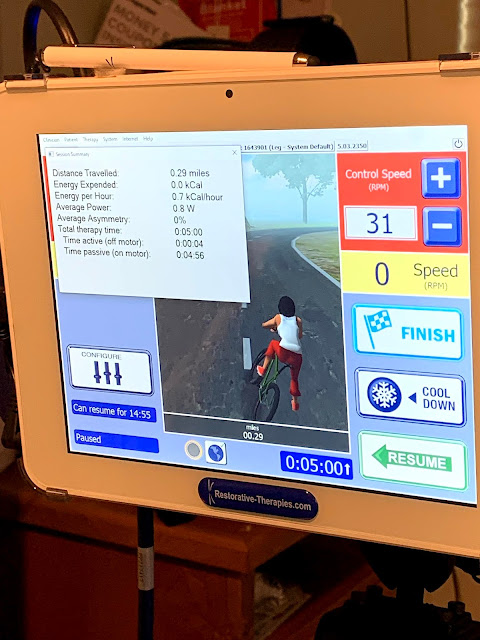 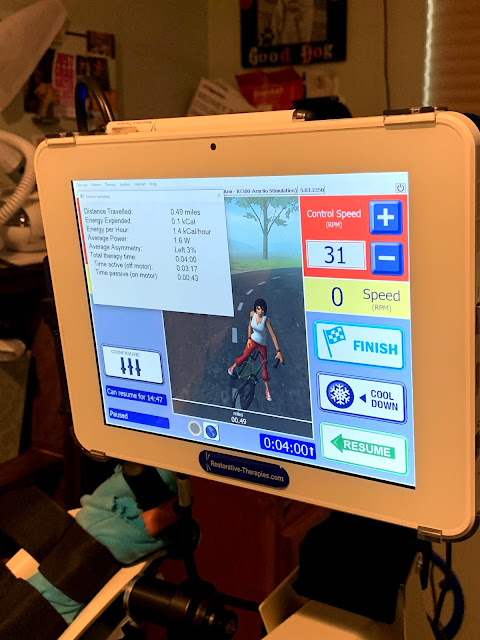 Thursday was a pretty good day. Karen came in and fed the hungry boys and got me dressed and up in my chair. Robby and I cruised down to Westside Animal Hospital and picked up his meds and then we cruised around Depot Park a couple of times and then came home, Robby was so excited to be out and about and I have to admit so was I. Dude and I took off for a cruise around Depot Park a couple of times, he was also excited to get out and about. We cruised back home and I watched TV for a while until Rosa came in, she fed the boys and then put me to bed. She buzzed around for a while and cleaned and vacuumed and washed some of my laundry before she left. I organized some more by pictures, watch TV and listen to music before I made myself shut everything off and meditate for a while.

Friday was a pretty good day. Karen came in and fed the hungry boys and they got me halfway dressed and up in my chair to write the exercise cycle, I back down to only five minutes because I'm getting a pressure sore from the back of my backrest… I need to get a higher Roho seat cushion. I a breakfast outside, the sun felt so great, and then we did some personal care and a nice long hot bath. I went back to bed and it was so nice, I was so calm and relaxed. Joy came in to take Dude for a cruise, she's a dog trainer and she is so impressed with him and I agree… He's so smart and caring. Adriana came in and fed the hungry crew and then fed me, she did some laundry and folded it, Washed my face and brush my and then went home for the evening. I spent the rest of the night watching TiVo, listening to music, and editing more pictures… Will I ever be done editing pictures? 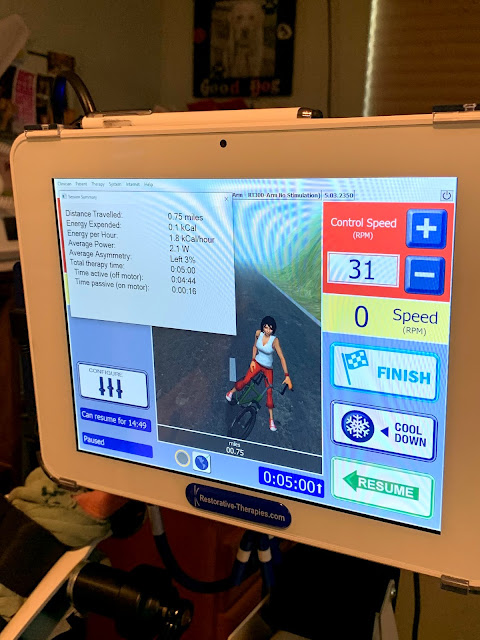 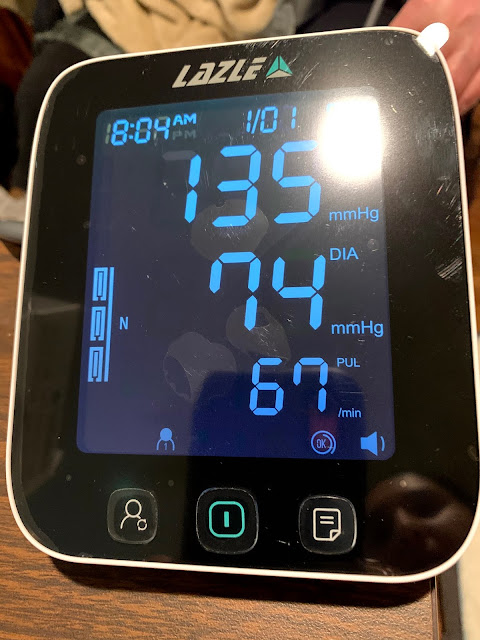 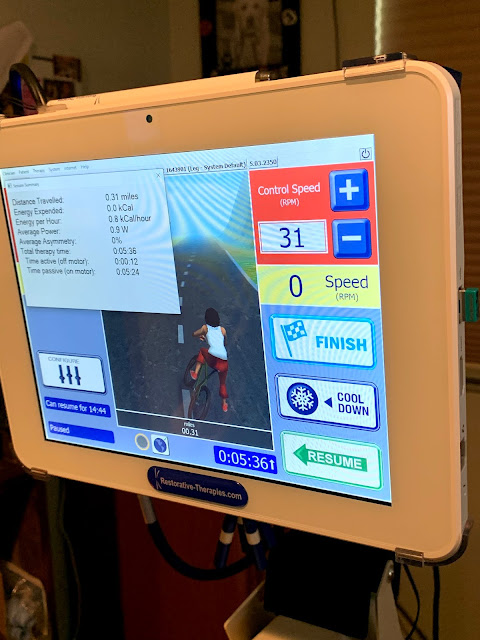 Saturday was a really good day. Cindy came in and fed the hungry crew and then fed me and got me dressed in up in my chair. Adriana came in and we went through some stuff in the garage, some stuff to get rid of and some stuff to take to storage. Omar came in and he and Adriana took some stuff to the storage while Cindy and I went shopping to get some Dragon fruit and to Staff of Life grocery store to get some stuff for a barbecue tomorrow, Omar is going to come by and barbecue some skirt steak, baked potatoes, and Mexican corn. We also went by the buttery bakery and got some pastries for the morning, some bread for dinner, and dessert. We came back and Adriana put me to bed and got me and the boys something to eat. The rest of the evening I watched TV and wrote in my blog, edited pictures, and listen to music.

Sunday was a really good day. Cindy came in and fed the hungry crew and then fed me and got me dressed up in my chair. I took Robby for a cruise over to and around the ballpark a couple of times, he wanted to just eat grass but there were a lot of Fox tales and I didn't want him to choke so I tried to discourage it. We cruised back and Omar was here and he had the potatoes on the grill, he marinated some skirt steak and we were going to have Mexican corn and we also got a fruit tart and a Lemon Tart at The Buttery. I decided that since I took Robby for a cruise I might as well take Dude also, he is the one that needs to expend some energy the most. We took off through the lagoon and we got about halfway and it started pouring rain, I was trying to encourage them to go a little faster but by the time I got home I was just soaked. Adriana took me in the bathroom and blow-dried my pants and my shirt a little bit but it actually wasn't too bad because although it was raining the humidity was high. We visited for a while and Adriana and Nico play table tennis… I was the referee. We ate dinner and it was awesome! I didn't realize that Omer was such a great cook, he also made guacamole. My mom came down, we got her some cheese hot dogs, Adriana brought Josh and Nico and then later on Cindy went to go pick up Rosa from work and they came by and we had a really nice visit. We need to do this more often. Cindy came back with Rosa and Karen came over to get a plate for her and her husband to go. These people are so much fun, we just laughed a lot. Karen came back at 4 PM and we came inside to do some personal care so we don't have to do it tomorrow morning and everybody else pitched in and cleaned up everything… Such a great group I have I am so fortunate. After we did the personal care I watch TV for a while, wrote in my blog, played some games I listen to music until I fell asleep. 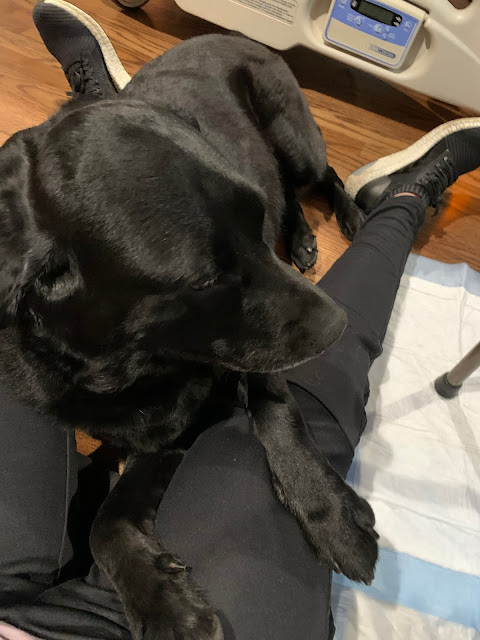 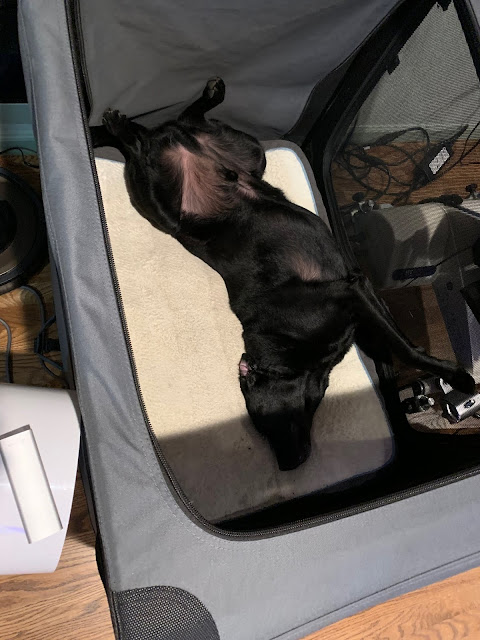 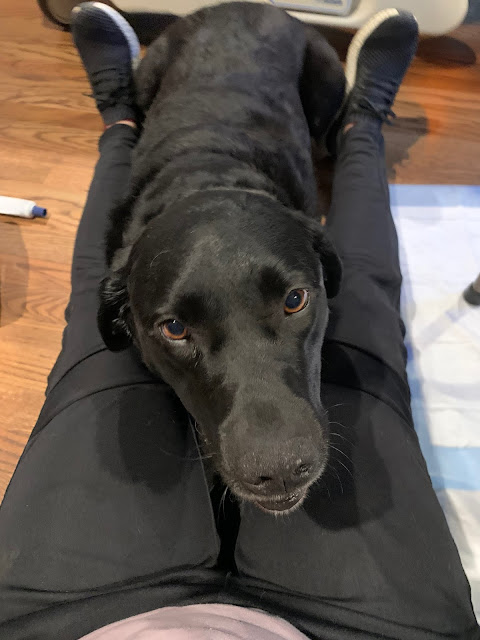 The food you have cooked akways sounds so yummy!